Yvonne Powless is a character found in the BrantSteele Hunger Games Simulator.

She once tried to take Roman Reigns away for herself. After her failure, she became a target for Grounded and Ungrounded scripts, as evidenced by one of George Raven's videos. 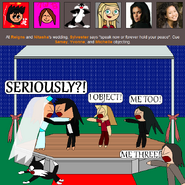 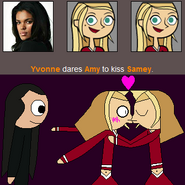 Yvonne dared Amy to kiss Samey.
Add a photo to this gallery

Yvonne is one of those characters who sticked around for a longer time than most BrantSteele characters.

Retrieved from "https://birdietalk-productions.fandom.com/wiki/Yvonne_Powless?oldid=6784"
Community content is available under CC-BY-SA unless otherwise noted.