Along with Slide Secretii, Red Secretii, Lily Secretii, and Pachinko Secretii, Turbo is a Super Secretii. Ever since trying out her wingsuit for the first time while 16, she wasn't seen with it off. This in itself is amazing since Turbo is now 32. Unfortunately, a wingsuit comes with a great cost, and that is going out of control in windy environments. She could easily get sick while trying to survive a hurricane or tornado. According to her own words, being stuck in a villainous world engulfed in complete darkness is a fate worse than death. Nowadays, her life is a complete wreck, thanks to Dragonlord. Turbo leads a double-life thanks to her secret marriage to him. By day, she is a manager of the Turbo Track. By night, she allows Dragonlord to let loose his sexual passion for her. When Dragonlord has seemingly stopped launching attacks on the BrantSteele realm, Turbo takes the opportunity to divorce from Dragonlord and hook up with Necrozma instead. This led the way to another "Turbo faces a darkness related villain" major storyline (Make Way for The New BT Productions Villain!), potentially leading to another major loss for her.

Slide Secretii is Turbo's best friend. Constant meetings led to them becoming friends, but it was Slide's decision for them to become best friends.

Turbo's relationship with Dragonlord is very complicated. For unknown reasons, whenever Dragonlord scored the most kills in a Hunger Games simulator round, Turbo will pass out and go through a vision. These visions have her wake up in Alefgard and see everyone that Dragonlord killed over the round. Her Super Secretii allies (and Chris McLean) are aware of Turbo's visions, but everyone else (including the Super Secretiis) isn't. Once, Dragonlord made Turbo throw a tantrum because he called her an idiot. Being stuck in Dragonlord's villainous world is a fate worse than death, according to Turbo. After Turbo For Hire got cancelled, Turbo competed in a Survivor round, where an unbreakable bond involving Dragonlord made Turbo realize what she missed out on. She tries everything she can to get an interaction out of Dragonlord, violent or friendly. According to Turbo Gets Grounded, Dragonlord is Turbo's boyfriend. Mere days after Turbo's return to BrantSteele, she got married to Dragonlord, with Scarlett as the witness. She divorced him after he stopped his attacks on BrantSteele.

Turbo once made it personal that she will kill Rowlet. After she killed Rowlet along with Sam E. Jay, she tried to escape grounding, but failed thanks to Dartrix.  In Brantsteele, this dislike still remains.

After the divorce from Dragonlord, Turbo hooked up with Necrozma. Unlike Dragonlord, Necrozma has a chance to prove to Turbo that it is not all about causing darkness (via the Ultra Necrozma form).

Turbo can fly using her wingsuit. This is normal considering her secret level's platforms are located far apart from each other.

Turbo's "Dragonlord Visions" can best be explained as Self Perception. Even though Turbo has this power, it only triggers if Dragonlord scores the most kills in a Hunger Games simulator round.

When it comes to Grounded and Ungrounded, Turbo's path is a long story. She first got Turbo For Hire, in which she is trying to defend the Ball of Light from Dragonlord while on the job. After it got transformed into a grounded series, Turbo went out to see what she missed out on since Turbo For Hire is no longer in her mind, and got herself a new boyfriend in the process.

Turbo stars in her own series, where she is trying to protect the Ball of Light from Dragonlord, and fails every time due to various reasons. After the Ball of Light gets stolen, Slide fires Turbo. This series only lasted five episodes before the RNG Host revealed on December 25 that the series will get rekindled into a grounded series.

Episodes in Turbo For Hire Edit

What Ever Happened to Turbo For Hire?! Edit

After the events of the BrantSteele Christmas Special, Chris McLean revealed that because Turbo got last place, her series will get rekindled into Turbo Gets Grounded.

After Turbo For Hire got cancelled, it was turned into a grounded series. Turbo went out to see what she missed out on, and got herself a new boyfriend in the process.

Episodes in Turbo Gets GroundedEdit

How Did Turbo Fail at Protecting the Ball of Light?Edit

Role in Survivor Revisited: The AftermathEdit

Turbo is the main protagonist. During Act 1, Turbo had to apologize to Pachinko for voting for Sam to win during Survivor Revisited. During Act 2, Turbo got into a three teams of two event, with Mr. Warner as her ally. Turbo's team was later revealed to have survived. Turbo then avoids being poisoned. During Act 3, Turbo mistakenly kills Cyan thinking she was really Dragonlord. Later, Dragonlord arrives for real and made Turbo throw a tantrum. The only mentions of Turbo in Act 4 were of her worrying over Fortune's disappearance, then proceeding to do poorly. Little mention of Turbo was made during Act 5. Turbo's only appearance during Act 6 was during the second-to-last scene of said act. After hearing the storm Dragonlord caused during Act 7, Turbo suffers from a heart attack and another Dragonlord Vision. After the vision, Turbo decides to end her misery with Dragonlord and accept the mission as a failure.

Turbo first appeared during several events in The LGB Return. She spends most of her appearances mentioning Dragonlord in some fashion. Turbo did end up suffering from the intense darkness blasted onto her from the episode Super Blooper Sunshine. She once had sex with Dragonlord, during LGB Night Shift 2. Turbo did not leave a note during The HSP Apocalyptic Log, as she had suffered from a big heart attack upon waking up. Eventually, she had enough with Dragonlord, and gets her revenge during DDT vs. D Rematch when she sealed him away into the digital world. Turbo celebrates her victory with Shyla and the rest of the DDT Trio, but her victory was rendered null when Sam frees Dragonlord from the digital world. Turbo manages to survive Dragonlord's darkness storm with no critical injuries, but she was unable to survive Dragonlord's first LGB tantrum as her fear of him kicked into maximum overdrive, making Turbo the first character to be killed off for real.

Even though Turbo has the lightest weight that could qualify for the Human Sunshine Project, she is not the lightest of all the members. That honor goes to Fortune Secretii instead, by one-sixteenth of an ounce.

Turbo is the first member of the Human Sunshine Project to have a revealed important relationship with a character who is not from the HSP (Dragonlord).

Turbo's "Dragonlord Visions" were first revealed during Scenes 15 and 16 of Survivor Revisited: The Aftermath.

According to Survivor Revisited: The Aftermath, Turbo is the only Super Secretii who has not won a Hunger Games simulator round.

After the conversion from just inches to feet and inches, it is revealed that Turbo is at the same height as Abigail Shirley and Nikki Bella.

Turbo was the first character to get killed off for real in Looney Games Bloopers.

Turbo's eyes used to be just blue in color, before acquiring central heterochromia at age 30.

Scarlett is the only person who knows of Turbo's marriage to Dragonlord.

During the Halloween Twist, Turbo is disguised as Emolga.

During Act 7 of Survivor Revisited: The Aftermath, Turbo suffers from a heart attack. 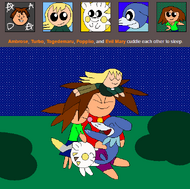 One of five characters involved in a 5-way cuddle.

Turbo chews out Mary for celebrating a Dragonlord victory. 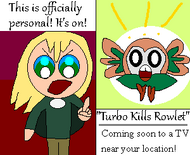 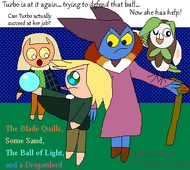 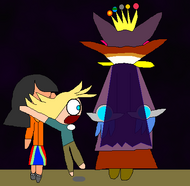 Turbo suffers from a mini heart attack after looking at Dragonlord's new outfit.

Turbo gets blown away by the fierce wind. 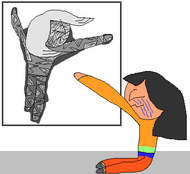 Turbo can be seen in a BW picture taken by Slide.

Turbo can be seen kissing Dragonlord.

Turbo passes out from exhaustion. 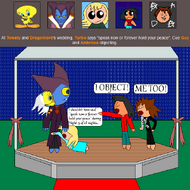 Turbo says to speak now or forever hold your peace. 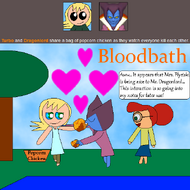 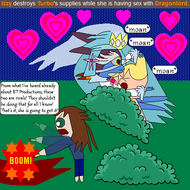 Turbo has some "fun time" with Dragonlord. 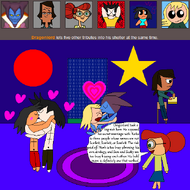 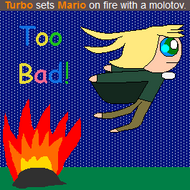 Turbo leaves Mario in ashes and flies off. 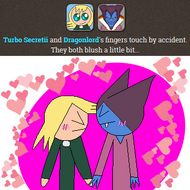 Wedding Dress Design concept.
Add a photo to this gallery

Retrieved from "https://birdietalk-productions.fandom.com/wiki/Turbo_Secretii?oldid=7355"
Community content is available under CC-BY-SA unless otherwise noted.