Start a Wiki
Tottie Babs is a member of the Human Sunshine Project.

Tottie appears whenever a challenger of a Secretii's secret course loses a life. She will say her signature phrase and leave. This signature phrase, "Too bad", came about after Mr. Babs constantly used this to describe the death of Mrs. Babs. Tottie loves to use her phrase much to the annoyance of the other Secretiis. Tottie has been called the "game over person" because of this job. Tottie's mood (most of the time) will be grumpy. Other people have said that Tottie will only be happy during two events: using her phrase and wearing her Fourth of July outfit. Tottie's secret is that there is a third event that makes her happy: watching videos about fails in general. She is obsessed with her phrase to the point she HATES it whenever somebody tries to steal her words. Tottie never got to try out Secretii Magic until she got her hands on a book about Disease Manipulation. Things skyrocked from there, and Tottie became able to use ten new sub-powers. Lemierre's syndrome is Tottie's weapon of choice.

Here's a list of all the powers Tottie has:

Tottie is unable to fly, despite having Teleportation. Thus, characters can say her phrase while on floating platforms and not suffer from the memory loss. Tottie cannot use all the sub-powers associated with Disease Manipulation, due to being a negative character.

Tottie is considering making her own series to counter Fortune Secretii's Fortune Exposed the Truth series. Tottie Saves the Day, it is about Tottie's teleportation/memory loss powers unintentionally triggering when someone is about to use "too bad" in a manner that suggests a bad character's punishment is final. Tottie gets ungrounded for saving a character from getting grounded or worse.

She started to use "Too bad" constantly after Mr. Babs used the phrase himself.

Mrs. Babs died while giving birth to Tottie. Mr. Babs used to refer to this as "death by childbirth" before using "Too bad".

She is the first winner of an episode of the RipRed HGSS Series.

Tottie is the only member of the Human Sunshine Project to have a prime-numbered weight.

She once competed in another deviant's Hunger Games simulator round along with Pachinko Secretii.

She competed in the BrantSteele Christmas Special, and won.

On rare occasions, Tottie will say "arrivederci", the Italian word for goodbye, and the German translation of her signature phrase. 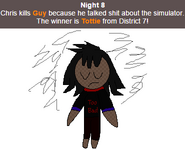 Tottie is blown up after a Mystery Winner Tantrum. 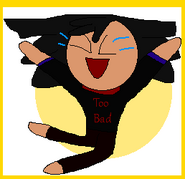 During a road trip, Tottie can be seen laughing while watching Super Mario Sunshine fails.

Tottie tells Fortune Secretii that she should do a meme herself, and that Tottie will react to her death. 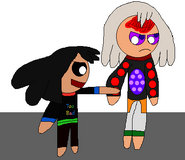 Tottie is mad over being forced to dress up like Dean Ambrose.

Tottie is the "chocolate" in this neapolitan picture.
Add a photo to this gallery

Tottie's concept art exposes that on the back of her shirt, there is a dark red "-1" displayed. The concept art also displayed that Tottie is the only member of the Human Sunshine Project to have pure black eyes.

During Tottie's older years, Pachinko projects that her hair will start to whiten, as written in her theory. She will also gain the appearance of a beard.

Retrieved from "https://birdietalk-productions.fandom.com/wiki/Tottie_Babs?oldid=3766"
Community content is available under CC-BY-SA unless otherwise noted.