Start a Wiki
Torracat is the villainous character in the RipRed HGSS Series.

Torracat is feared by the other characters, mainly because he was the only one who won more than once before RipRed HGSS 25. But that did not stop Torracat from becoming the first character to score a third victory, during RipRed HGSS 39. Torracat is villainous to the point the recap will mention "And once again, a Torracat victory was avoided, thanks to [insert character who killed Torracat] and [insert the winner]." 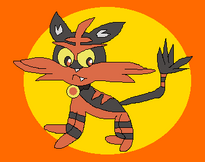 General reference.
Add a photo to this gallery
Retrieved from "https://birdietalk-productions.fandom.com/wiki/Torracat?oldid=2310"
Community content is available under CC-BY-SA unless otherwise noted.