Sylveon is one of eight authority figures to Eevee.

Sylveon can take on one of several roles, depending on the series.

As the last authority figure to speak to Eevee, Sylveon typically sends Eevee over to a room, after Glaceon grounds Eevee.

Sylveon is one of the earliest competitors to come to the simulator realm of BrantSteele. Nine times out of ten, you would see Sylveon in District 1 along with Pikachu.

During an episode, Sylveon provided some special effects for Scotty's love confession to Dragonlord.

Sylveon is a member of Team Kalos and has the seductive/peaceful perk combo. She is armed with a magic wand so it can simulate Fairy attacks. Based on the perk combo and weapon, Sylveon can stir up drama within the naive and rich teammates and can transform opponents into sheep, but she cannot score any kills.

Sylveon becomes Mega Sylveon through the Sylveonite. Its ribbons multiply in great numbers. They have become stronger in strength as to allow Mega Sylveon to fly without the need of wings. As such, it changes typings to be dual typed (Fairy/Flying). It gains an ability called Fairy Beauty (this ability combines the effects of Cute Charm and Pixilate). 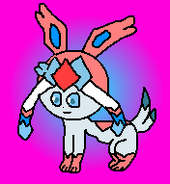 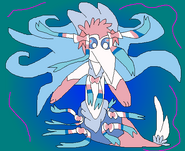 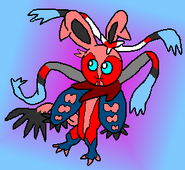 Sylveon tells stories about herself to Mary Canary. 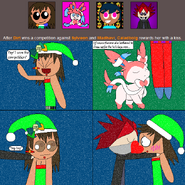 Sylveon loses a mini competition to Dirt.
Add a photo to this gallery

Sylveon actually has a whole folder dedicated to her on Birdietalk Productions's DeviantArt account.

As of late, no new Sylveon-related images have been posted on Birdietalk Productions.

Sylveon's info can mainly be found in another wiki: w:c:pokemon:Sylveon

Retrieved from "https://birdietalk-productions.fandom.com/wiki/Sylveon?oldid=7007"
Community content is available under CC-BY-SA unless otherwise noted.