Starly is a character in the RipRed HGSS Series.

Starly had some bit of reputation for being the first character to appear in a Hunger Games simulator highlight along with Palkia. Starly's death in said picture did not look so good going into future days of BT Productions, leaving him involved less than Palkia. However, BT Productions still likes Starly and plans to bring him back someday.

While Starly did appear in Character Madness along with many other Pokemon, he got eliminated by Doctor Mario in the first round by a score of 101-84. 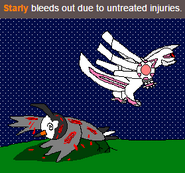 Starly was involved in the first Hunger Games simulator highlight.
Add a photo to this gallery

Starly, along with Palkia, got involved in the first ever BrantSteele Hunger Games Simulator highlight.

Retrieved from "https://birdietalk-productions.fandom.com/wiki/Starly?oldid=4948"
Community content is available under CC-BY-SA unless otherwise noted.