Rowlet is a character in Dartrix Gets Grounded.

Role in Dartrix Gets GroundedEdit

Similarly to Dark Bowser Gets Grounded, Rowlet is taking the role of Bowser Junior where he is the younger good sibling. Decidueye is shown to be concerned for Rowlet's health, as the script of the incident where Dartrix created a thundersnowstorm reveals.

Rowlet appeared in a comedy movie as "The Genius". This role was inspired by a description saying "and the genius Rowlet". Rowlet's role should not be confused with Decidueye's role as "The Geek/Nerd". 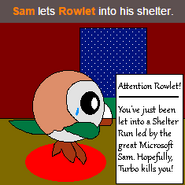 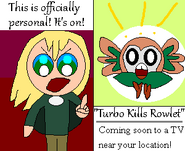 Turbo Secretii once made it personal that she will kill Rowlet. 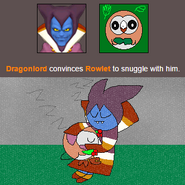 Rowlet gets snuggled by Dragonlord.
Add a photo to this gallery

Decidueye did ground Rowlet once.

Rowlet's name led to the creation of Rowley.

Rowlet has been fused with several other characters.

Retrieved from "https://birdietalk-productions.fandom.com/wiki/Rowlet?oldid=3404"
Community content is available under CC-BY-SA unless otherwise noted.