The Secret of Ricco Tower

Ricco was born in Venice as "Ricco Meccanismo". She formerly pursued a career to be a mechanic, before becoming a Secretii. While trying to decide a place to build her secret level, she discovered a harbor. It was eventually named "Ricco Harbor". Sometime after the release of Super Mario Sunshine, Princess Rosalina requested for Ricco's permission to create a galaxy after her level. Ricco accepted and eventually got married to an unknown husband. A child was born during the marriage, but before Super Mario Sunshine DX. Ricco has been diagnosed with OCD and threatens to hold people responsible if things do not go to plan. She tends to be the saavy person of the group and tries to get the other members to follow her plans, only to fail because she comes off as too domineering. And yet she speaks the "Cassandra Truth" as the events she warns about do happen.

Ricco's secret course is the only course to be reused in a later Mario game. (Super Mario Galaxy 2, as Twisty Trails Galaxy)

Drogo Secretii can oftenly be mistaken for Ricco's sister. The correct term is half-sister.

Ricco formerly pursued a career to be a mechanic, before becoming a Secretii.

Ricco got her name from the place she will eventually discover (Ricco Harbor).

Ricco got an update to her face once it was apparent that gear shapes can be drawn. An update to her forehead was teased when a picture showed Secretiis as they appeared in Super Mario Sunshine DX.

Ricco's Italian middle name translates to "mechanism, machinery, gear, working, or work", which corresponds to her former desire to be a mechanic. 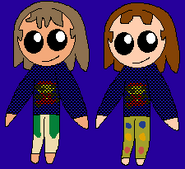 During the Halloween Twist, Ricco is disguised as Drogo. 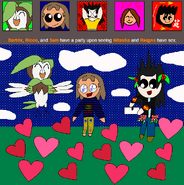 Along with Dartrix and Sam Jay, she is partying. 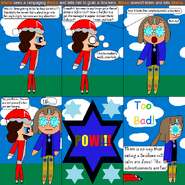 Ricco is told to grab a Snickers, but she doesn't listen.
Add a photo to this gallery

Retrieved from "https://birdietalk-productions.fandom.com/wiki/Ricco_Secretii?oldid=6543"
Community content is available under CC-BY-SA unless otherwise noted.