Princess Peach is a member of Team Fortune Street.

A princess who is constantly kidnapped by Bowser. Mario manages to save her every time, and they eventually got into a rescue romance. After Weatherstar4000video made them a couple, BT Productions followed suit. In the BT Productions verse, Peach, Daisy, and Rosalina are depicted to be sisters. 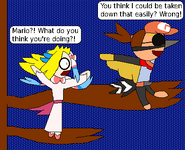 Peach is concerned over Mario's health. 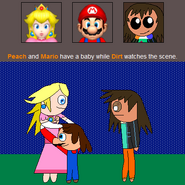 Peach gives birth to a baby. 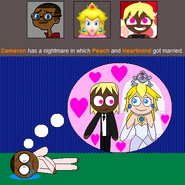 Peach got married to Heartmind (not really since Cameron was dreaming). 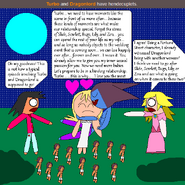 Peach is shocked that Dragonlord and Turbo had a romantic interaction.
Add a photo to this gallery

Peach is the only Mario member of Team Fortune Street to also be a member of the S-Rankers.

A YouTube video reveals Peach's parents to be named Simon Toadstool and Catherine Toadstool. BT Productions twisted these names by making them the Toadstool grandparents.

Retrieved from "https://birdietalk-productions.fandom.com/wiki/Princess_Peach?oldid=6097"
Community content is available under CC-BY-SA unless otherwise noted.