Luigi's girlfriend and is occasionally with Princess Peach, though not to the same extent as Eevee and Pikachu. When a princess is needed for a simulation round, Daisy is the second-best option, after Peach. In the BT Productions AU, Peach, Daisy, and Rosalina are depicted as sisters. 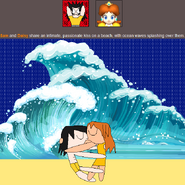 Daisy kisses Sam on a beach.
Add a photo to this gallery

Retrieved from "https://birdietalk-productions.fandom.com/wiki/Princess_Daisy?oldid=5733"
Community content is available under CC-BY-SA unless otherwise noted.