Start a Wiki
Primarina is the police officer in the various Grounded and Ungrounded scripts.

Primarina acts as the police in grounded videos.

Primarina first appeared during "Toad Pushes Dragonlord Off the Rooftop/Grounded". During that script, Primarina came to take Toad away when the other S-Rankers called.

Primarina becomes Mega Primarina through the Primarite. The hair grows some more, to the tip of the tail. It is also restyled to be mostly untied. The eyelashes become more attractive. Extra frills grow on the arms, while extra pink spikes grow along the fish tail. Through the new ability Siren's Spell, Mega Primarina's voice becomes more beautiful to the point that others who hear this voice fall in love. Mega Primarina's voice is also powerful enough to summon megatsunamis. 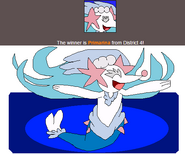 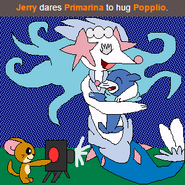 Primadueye is a fusion of Decidueye and Primarina.
Add a photo to this gallery

Primarina has fused with other characters. Here's the list.

Primarina's role is a pun on police sirens and Primarina having the traits of sirens.

Retrieved from "https://birdietalk-productions.fandom.com/wiki/Primarina?oldid=6366"
Community content is available under CC-BY-SA unless otherwise noted.