Start a Wiki
Octavia Mercer is a character residing in the Randomverse.

Octavia was created from a USA Teen Maker. She is an outspoken 15-year-old. She has hazel eyes, a fair complexion, and straight red hair in a short ponytail. She is very short, fairly muscular, and wears a lot of 'nerdy' clothing. She has a speech impediment and is a rather poor dancer. She attended the School of Heroics and learned Sloth Manipulation as a result. She is from Thornton, Colorado. Few know that she has been stealing money. She has three brothers, all of them being younger than her. She became somewhat infamous after being involved in a controversial moment with Zira Brown during the Pride Month Challenge. She got banned from BrantSteele as a result of that, partly because Heartmind Smelldeath refused to marry Seth Rollins. 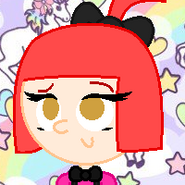 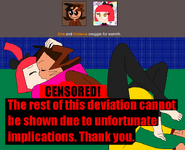 Octavia's act with Zira got her banned from BrantSteele.
Add a photo to this gallery
Retrieved from "https://birdietalk-productions.fandom.com/wiki/Octavia_Mercer?oldid=6188"
Community content is available under CC-BY-SA unless otherwise noted.