Start a Wiki
Maxine Bedford is a character in Vibrant Wind Adventures.

A very big, yet crazy non-binary black person working as an anthropologist, who is actually an alien from another planet, with literally the WORST self-control and logic. The initial generation described Maxine as having a mysterious device and a love for good food. Maxine takes an interest in tigers, and would probably go too far and try to LITERALLY BRING HOME A TIGER. Known as one of the more random characters in the Randomverse. As far as powers go, Maxine doesn't have special powers. Maxine DOES know martial arts and can also wrestle. Maxine is also whiny, arrogant, and self-important. Fairiez prefers to refer to Maxine using "they" pronouns. Maxine was picked on while they were younger, since they were part alien, nonbinary, and just doesn’t look the most attractive. If there's anything that Maxine hates more than anything, it's being met with phrases like "What gender were your BORN with?", "What's your REAL gender?", "Go back to Tumblr!", and "PEE YOURSELF!" Maxine's reaction to these questions depend on whether they were asked politely or not. Maxine also hates it whenever people talk negatively about tigers and people refusing to get Maxine a tiger. Either way, Maxine is a pretty strange character already even without the gender thingy. When Maxine cries, the tears are made of slime. It is rare for Maxine to cry.

Maxine Bedford is a character in the Murder Games. Maxine is a bulky lunatic on Team Fairiez with a pet tiger in Items. BT Productions thought Murder Games was the perfect environment for Maxine.

While Fairiez didn't publicly post about it, it was revealed in a Discord chatroom that Maxine is severely allergic to black olives. 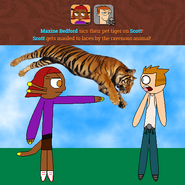 Maxine sics a tiger on Scott.
Add a photo to this gallery
Retrieved from "https://birdietalk-productions.fandom.com/wiki/Maxine_Bedford?oldid=7091"
Community content is available under CC-BY-SA unless otherwise noted.