She used to be known as "Mary Melody", before she knew about the bird Microsoft tradition followed by Sam, Mike, and Anna. Instead of going for alliteration like she did before, Mary's new name goes for rhyme. True to her older name, Mary loves music and singing (Especially "Mary Had a Little Lamb" and "Merrily We Roll Along"!) to the point she manipulates music for her own benefits. Other characters like to claim that Mary is Sam Jay's sister, but that is not true. She is currently in a relationship with Mike Macaw. Some time after Evil Mary got her necklace color changed to blue, Mary changed her shirt color to orange. BT Productions confirmed this was done so she can mock the rainbow music gimmick going on with the three versions of Mary.

Mike Macaw is Mary's boyfriend. They haven't gotten to the point of marriage yet.

For unknown reasons, whenever Dragonlord does his victory pose, Mary likes to suddenly sing "Mary Had a Little Lamb", annoying those around her. It doesn't help that Mary was responsible for one of Dragonlord's failed runs. Challenge Plan C comes, and they become co-winners. They have treated each other with respect since. 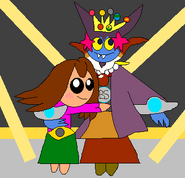 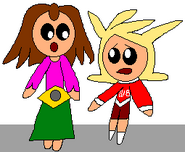 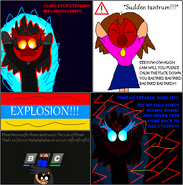 Mary throws a sudden tantrum at Sam, warning him to calm down.

Mary is worried upon seeing Scotty nailed to the BBC 1993 Logo.

Mary celebrates a Dragonlord victory much to the anger of Pikachu, Sam, and Turbo.

Mary attempts to stop Emma from going out with Fortune Secretii. 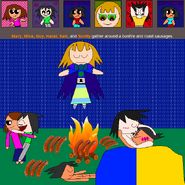 Mary accepts being glomped by Mike.

Mary kisses Mike while at the pool party. 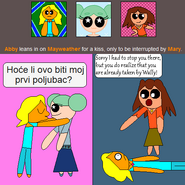 Mary interrupts Abby as she was trying to kiss Mayweather.
Add a photo to this gallery

Mary is the first member of Code LTIB to win a Challenge simulation. She is also the first character who is not a member of Team Fortune Street to do so.

Despite loving to sing "Mary Had a Little Lamb", Mary apparently doesn't like the song "Mary Mary Quite Contrary".

Retrieved from "https://birdietalk-productions.fandom.com/wiki/Mary_Canary?oldid=4845"
Community content is available under CC-BY-SA unless otherwise noted.