Sam Jay, Mike Macaw, Mary Canary, Anna Zappinski, Zira Brown, Scotty Raven Jay, George Raven, Guy the White, Michael Lionheart, Michelle Lionheart, Sam E. Jay, Mike E. Macaw, Mary E. Canary, George E. Raven, Scotty E. Raven, Guy the Black, Ben Wilburn Warner, and Victor E. Warner all try to win a Hunger Games simulation, but end up dying. The games were supposed to end once each member wins once, but after the net neutrality rules got repealed by the FCC, the series got cancelled as a result. Then somebody got curious about what LGB was about, so the series was given another chance. However, it was revealed that net neutrality will get repealed during April of 2018, so the series got cancelled again.

Random shorts started airing after "Jacobdee's Request". These shorts contain tidbits of info that crop up as a tiny continuity nod in later episodes.

The night shifts started appearing after "Ninetales Appears". These shifts contain three random nighttime events that Chris caught with his surveillance cameras, and he decides for them to be canon LGB material.

Memes can be filled out for the LGB verse as well.

After Super Blooper Sunshine's ending, the OC World was left without Internet for an entire day.

DDT vs. D Rematch ended with Turbo Secretii finally getting her revenge on Dragonlord (much to Dartrix's shock).

While Sam's Away, Scotty Will Play revealed that Dragonlord was trapped for only two days. He proceeds to attack BrantSteele again.

Dragonlord's attacks caused Scotty to be trapped inside of Mario's shelter.

Dragonlord unleashes a darkness storm after the events of Sam is Still Missing!. 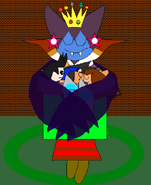 While Scotty was in Mario's shelter, he cuddled Beulah, Dragonlord, and Evil Sam.

During the events of Microsoft Sam Lives!, Dragonlord and Scotty share the big damn kiss. 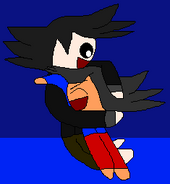 "Six by Six Challenge" was such a gamechanging short that Sam was actually concerned for Scotty's life. 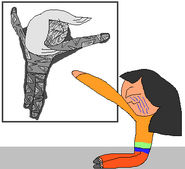 Turbo is confirmed to be killed off for real.

Dragonbird regrets his actions after seeing what resulted as a result of Dragonlord's first LGB tantrum.

Pikachu throws a party to celebrate a major milestone, with Eevee and Pidgey invited.

Lily Secretii shows off her Summer Power-Up outfit, which causes Guy to fall in love with her. 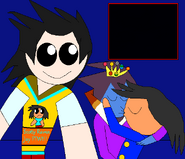 Sam takes a selfie to prepare for "The Calm Blooper Party" while Dragonlord and Scotty kiss.

Meanwhile, Lily Secretii decides to reject Guy's feelings. Before she leaves, she kisses him.

The simulator loves to pair up Emma and Fortune Secretii, so the later decides to bring her new girl into LGB.
Add a photo to this gallery

This series used to focus on just Code LTIB before "Diamond/Pearl Special" aired. Since then, other characters continue to team up with Code LTIB to keep the series going.

Turbo is the first character confirmed to be killed off for real in this series.

Lily is the first character to win back-to-back episodes.

Retrieved from "https://birdietalk-productions.fandom.com/wiki/Looney_Games_Bloopers?oldid=3795"
Community content is available under CC-BY-SA unless otherwise noted.