Kevin Owens is a character in the RipRed HGSS Series.

A wrestler who usually cannot go somewhere without his "guardian angel" by his side". His relationship with Sami Zayn has turned from "best friends" to "enemies" back to "guardian angels". He has an early RipRed HGSS victory recorded in his history book.

Owens is shocked that Paige didn't invite Zayn to her pool party. 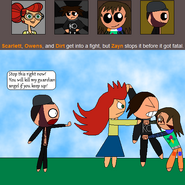 Kevin Owens was involved in a fight that got stopped by Sami Zayn. 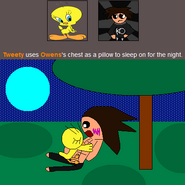 Tweety uses Owens's chest as a pillow to sleep on.
Add a photo to this gallery

Owens did win an episode, RipRed HGSS 2. No further victories have been confirmed.

Retrieved from "https://birdietalk-productions.fandom.com/wiki/Kevin_Owens?oldid=3705"
Community content is available under CC-BY-SA unless otherwise noted.