Katniss (Full Name: Katniss Everdeen) is a character in the RipRed HGSS Series.

Katniss is the main character of the Hunger Games. To keep true to her original spot, BT Productions assigns her to the last spot of District 12 in a simulator. Katniss is usually the first person BT Productions goes for if she needs a character from the Hunger Games. She has also appeared in RipRed. Lately, she has been an NPC in the Troper Games, with several custom events involving her. Her love interest is Peeta. 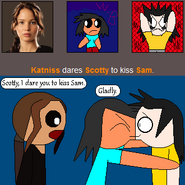 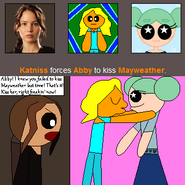 Katniss is aware of how Abby failed to kiss Mayweather, so she forces them to kiss. 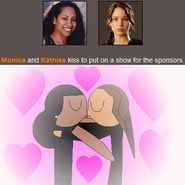 Katniss kisses Monica to put on a show.
Add a photo to this gallery

Katniss has a confirmed victory, in RipRed HGSS 4. No further victories have been confirmed.

Retrieved from "https://birdietalk-productions.fandom.com/wiki/Katniss?oldid=6359"
Community content is available under CC-BY-SA unless otherwise noted.