If you are a beginner to secret levels, Hillary is the one to talk to. Her secret level isn't too difficult and provides the lesson that later secret levels will increase in difficulty. However, some people avoid her and instead pick Slide Secretii or another Secretii as the first secret level to challenge. Hillary is personified as the newbie. She does not really know much about the outside world due to living in Bianco Hills all her life. As such, the only other people she knew are her parents and Dirt Secretii. She eventually married Dirt, but cannot have a child until this marriage is no longer seen as sister incest.

Hillary's main personality trait is being naive, with a secondary trait of being curious. This personality deliberately conceals her diagnosis of Angelman syndrome, which includes traits of happiness/laughter, excitability, hypermotoric behaviors, and a short attention span. Her speech is severely impaired because of the disease, and she often relies on Dirt to speak for her.

Sometime during the 17 year time skip, Hillary's marriage to Dirt is no longer seen as incest. As such, Hillary gave birth to Aero Secretii. More info about Aero can be accessed by visiting her page.

Hillary teamed up with Dirt after finding out that Caladbolg needs two people per deviant for the third Hunger Butts season. After the game gets underway, Hillary seems easygoing at first. However, after Dirt starts to kill people, a rift starts to form between the Secretii sisters. Eventually, Hillary does score a kill using a rope. Even though Hillary survives the Feast, she dies the next day when a land mine blows her up. Hillary returns to BT Productions covered in soot and all charred up from the explosion. 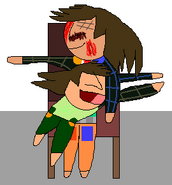 Hillary reacts to Dirt Secretii's return from the Hunger Butts.

Hillary is shocked at Pachinko and compares her to Dirt. 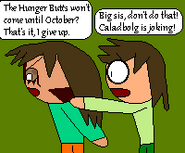 Hillary tries to stop Dirt from quitting the Hunger Butts. 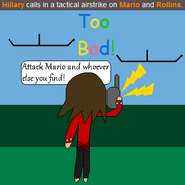 Hillary calls in an airstrike.

Hillary runs away from her sister, creating a rift.

Hillary steps up her game and scores a kill.

Hillary gets blown up after trying to arm a land mine.

In the climax, it turns out that Caladbolg was responsible for blowing Hillary up.
Add a photo to this gallery

During infancy, she and Dirt Secretii were hard to tell apart.

Hillary is one of four Secretiis to have a 1:00:00 Red Coin Timer. The others are Dunstan Secretii, Bruce Secretii, and Fortune Secretii.

Hillary is the first Secretii to challenge her own secret level and survive.

Hillary is the only Secretii to have a fictional birth location. The others were born in parts of the real world before moving to Delfino Plaza.

Retrieved from "https://birdietalk-productions.fandom.com/wiki/Hillary_Secretii?oldid=6857"
Community content is available under CC-BY-SA unless otherwise noted.