Fletchling is a character in the BrantSteele Hunger Games Simulator.

An innocent tiny bird who got dragged into being a runaway from Dean Ambrose just because she was so popular. This escapade gave her what appeared to be permanent scars on her face, wing, and tail (Ambrose inflicted all of those injuries). The scars healed after Ambrose killed Fletchling, however. She appears to be given a break during Looney Games Bloopers when the plot of LGB 48 was announced, only to fall into a depression when the FCC repealed net neutrality. Now, she is thrown into another big plot due to "external circumstances" as Chris McLean speaks, leading into the plot of When a Robin Meets Time. At least Dialga is there to help Fletchling this time.

Seth Rollins prepares to give Fletchling some serious love. 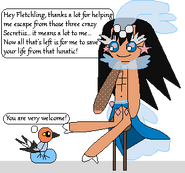 Fletchling is at a luxurious pool party hosted by Mary Canary.

Fletchling takes a bath in a container of ice cream.
Add a photo to this gallery

Like the other small Pokemon, Fletchling's icon will be an official game sprite.

Fletchling is only used for highlights these days. That was until Google added the name as an online chip, leading to the events of The Struggles of Being Popular.

Retrieved from "https://birdietalk-productions.fandom.com/wiki/Fletchling?oldid=5823"
Community content is available under CC-BY-SA unless otherwise noted.