Start a Wiki
Decidueye is the authority figure of Dartrix.

Role in Dartrix Gets Grounded Edit

Decidueye is the one in control of Dartrix's behaviors. It is revealed in several episodes that Decidueye will only ever ground one character at a time. One time, he even grounded Rowlet.

Decidueye's info can mainly be found in another wiki. 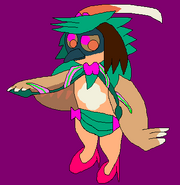 Baydueye is a fusion of Bayley and Decidueye. 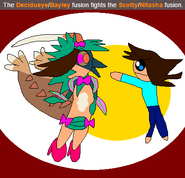 Primadueye is a fusion of Decidueye and Primarina.
Add a photo to this gallery
Retrieved from "https://birdietalk-productions.fandom.com/wiki/Decidueye?oldid=6810"
Community content is available under CC-BY-SA unless otherwise noted.