Cryo Secretii is a member of the Human Sunshine Project.

The Secretii of ice. Like many other Secretiis, Cryo has a medical condition. This is cryoglobulinemia, where her cryoglobulins cause damage to her body. This is why her arms and legs are reddish/purplish in color. Luckily, her Secretii Magic has prevented any further infection. The other characters advise Cryo to amputate her arms and legs, but she won't listen. People who do not know Cryo well will mistake the discolored limbs as being the result of an alien mutation. This is where the similarities end. Cryo's personality tends to center around idioms containing the word cold, with the most dominant being cold-hearted. As such, it is hard trying to befriend her, a trait shared with Corona Secretii. However, since Corona is based around volcanoes, Cryo is rivals with her. The relationship flip-flops if Cryo or Corona becomes affected by the Nega Switcheroo. It is implied Cryo used to be a nice person before her cryoglobulinemia diagnosis caused her to commit a heel turn. Cryo's Secretii Magic tends to be centered around ice and snow. As such, Cryo will use a lot of Ice type attacks if she became a Pokemon. After interacting with Scotty Raven Jay, Cryo reveals that the reason for her cold-heartedness stems from her external appearances. As such, Cryo tends to personify the trope "True Beauty Is on the Inside". 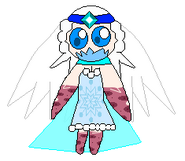 Concept art.
Add a photo to this gallery

In a similar fashion to Galaxia Secretii, Cryo tends to conceal her mouth behind something.

Cryo is the first Secretii to have white hair. Fortune Secretii and Pachinko Secretii do not count because their hair tends to lean more towards a grayish color.

Retrieved from "https://birdietalk-productions.fandom.com/wiki/Cryo_Secretii?oldid=4907"
Community content is available under CC-BY-SA unless otherwise noted.