Secret of the Village Underside

A very energetic character born in Texas mere hours before Super Mario Sunshine was due to be released. Secretii Rules state that a Secretii has to be at least 20 years old to design a secret level, so Chuck had to be rapidly aged from an infant to the mentioned 20 years of age. She also had to make up a level on the spot so that Super Mario Sunshine can be released successfully. Many lives were lost on that level, and most of the blame was on Chuck's high energeticness. Her high levels of this energy is let out when her anger spikes, making her have a pleasant temper.

Chuck has Peak Human Strength. This is fitting, as per her secret level.

Chuck does not have any reaction to Pachinko. 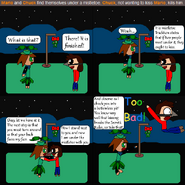 Chuck refuses to kiss Mario under mistletoe and kills him.
Add a photo to this gallery

Chuck is the heaviest Secretii. (and out of everyone in the Human Sunshine Project)

Chuck's gender can be very confusing, as the Secretii Rules state that Chuck has to be female.

Chuck's surname refers to her having a pleasant temper.

Retrieved from "https://birdietalk-productions.fandom.com/wiki/Chuck_Secretii?oldid=5734"
Community content is available under CC-BY-SA unless otherwise noted.