Start a Wiki
This article is referring to the RNG Host. If you were looking for the WWE Superstar, click here: Chris Jericho

Chris McLean is the host of the BrantSteele Hunger Games Simulator.

Chris's info can mainly be found on another wiki. In BT Productions, Chris acts as the host for Hunger Games and Total Drama. He has control over what tributes do in Hunger Games rounds. According to The Struggles of Being Popular, he manages the coding of the Hunger Games simulator. He has a Randomverse counterpart named Khris McFlame.

According to the Superpower Wiki, Chris has Plot Control, as he controls what the tributes do during a round of the Hunger Games.

These events mention Chris in some form: 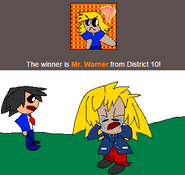 Chris is less happier than usual when he sees Mr. Warner crying. 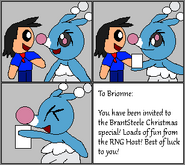 Chris gives Brionne a prize for winning a Hunger Games simulation round.

Chris saves Dragonlord from being thrown out by Patty.

Chris reveals to Dragonlord that he has fulfilled his destiny.

Chris panics over thirteen characters getting critically injured before getting struck by the darkness storm.
Add a photo to this gallery
Retrieved from "https://birdietalk-productions.fandom.com/wiki/Chris_McLean?oldid=6346"
Community content is available under CC-BY-SA unless otherwise noted.