The creator of the wiki enjoys using this simulator. BrantSteele's Hunger Games simulator provides a lot of the insanity in "Birdietalk Productions".

With the Hunger Games simulator, you can input in your own tributes instead of the default Hunger Games cast. Custom events can also be added. You can manipulate the death rates, manipulate the cornucopia and Feast default event rates, disable arena events, and add custom text.

In BT Productions, custom events tend to personify how Day and Night tend to go. Day is random stuff, but Night is about romance. Arena events are disabled to prevent their associated punishments from happening again. Certain characters are in the tribute list more often than others. She has added various mechanics to her version to make it unique from other versions. The arena in her version is separated into several parts. The beach (1 meter from sea level) leads into a cliffside (5 meters), which leads into the main area. A tall tree (115 meters) and a mountain (9 meters) can be found.

This happens whenever a tribute or a couple summons a giant ocean wave, or when a megatsunami rolls in. Ocean waves are nonfatal, but megatsunamis are fatal. The arena remains flooded until the next day or night, forcing the tributes to perform their events inside shelters. If two events involving waves or megatsunamis happen, then the arena will remain flooded until all of the water recedes. The flood can carry over between rounds, unless evaporated by a drought. Up to six tributes can raise their hands to summon six waves at once. Two, three, or four megatsunamis can strike the arena at once from the four cardinal directions. Multiples of four can occur if the same size megatsunami follows the first from behind, combining the waves and making four monstrous megatsunamis. The only limit on the megatsunamis is the character limit. This means any number of megatsunamis can kill any number of tributes at a time, but the six tribute versions are rare. The same applies to the ocean waves. The multiple tribute version of these events seem to work in an odd way. If one tribute is involved, that tribute's name is mentioned. If multiple tributes summon ocean waves, then the event will say "(Number of tributes) raise their hands in the air, causing (equivalent number of ocean waves)". The megatsunami events work differently, as up to three tributes can be named here. Four to six will say "drowning (number of tributes)". When the final version of the BT Simulator is released, all of these events are intended to be rare.

Various characters can brew potions. The possible potions are below.

These characters function differently on the Hunger Games simulator.

This is a specific version of the Hunger Games simulation where killing events are encouraged. This was made since BT Productions missed the days of trying to get 10 kills on a specific person. Specific 1-player events are the only events that could happen. They are listed below.

This is a specific version of the Hunger Games simulation where a majority of events focus around romance. This is a change from the normal BT Productions version where only the nighttime events tend to focus around romance. The 1-player events tend to poke fun at how a tribute is lonely and is looking for love. For encouraged fairness, the baby events have been reduced so that only the realistic events are possible (one baby to octuplets).

Events are based around the battles found in Pokemon. Here, tributes use a variety of attacks from the Pokemon series, and a death is referred to as "fainting". As such, a kill is referred to as a "KO". Arena events have wild Pokemon appear to cause mayhem.

Kobe uses the BT Productions code, and his events are drawn as highlights and put into the "HUNGER GAMES SIM DRAWINGS" folder. It is currently unknown how many characters Kobe put in his simulator. Then it turned out that Fairiez quit the Object Show fandom, so it is unknown what will happen to Soother, who is now known as Lola Molle. All of the following characters were confirmed through drawings.

Fairiez uses the BT Productions code, just like Kobe. So far, only Maxine Bedford is confirmed to be in Fairiez's character list.

All events are in order unless otherwise noted. 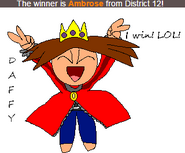 Dean Ambrose was the one who created D.A.F.F.Y., and is also the current holder of most victories ever.
Add a photo to this gallery
Retrieved from "https://birdietalk-productions.fandom.com/wiki/BrantSteele_Hunger_Games_Simulator?oldid=7097"
Community content is available under CC-BY-SA unless otherwise noted.