She used to be called "Anna Peacock", before she got abducted by aliens. Upon return, she discovers that she learned how to use laser eyes. A new name (Zappinski) was born from these new powers. She used to date Sam Jay so she could get his control freak behaviors under control, but she decides to voluntarily leave him alone after he decides that he wants Scotty Raven Jay. Voluntarily breaking up with Sam may have led to jealousy, as Anna zapped Dragonlord for being too much of a tyrant after he kissed Roy G. Balloon. Other people like to believe Anna's jealousy may have stemmed from Anna being single after she broke up with Sam. Anna likes to think that leaving Sam alone was a good move after watching Looney Tunes Bloopers and discovering that her character disappeared. However, she hates Abby and Zira as they seemed to replace her role as Sam's love interest in the show (ESPECIALLY Zira). Anna stayed single for a long time, until Natural Sam came along and changed everything.

Anna suddenly zaps Sam after he forces Brionne to kill a character.

Anna gets struck by the darkness storm. 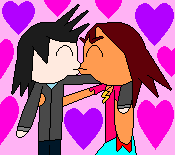 Anna's new boyfriend is revealed to be Natural Sam.

Anna tries to relax in a pool.

Anna demonstrates what normally happens in a wedding.
Add a photo to this gallery

Anna used to be called "Anna Peacock" before being abducted by aliens. She gave herself the new last name after discovering her laser eye powers.

It is unknown on exactly where Anna's newfound jealousy came from.

Retrieved from "https://birdietalk-productions.fandom.com/wiki/Anna_Zappinski?oldid=5671"
Community content is available under CC-BY-SA unless otherwise noted.