Amy is a player in the BrantSteele Hunger Games Simulator.

Amy is aggressive, snarky, impatient, and will take advantage of anyone if she finds the opportunity. She believes that she is both the "beauty and the brains" between her and her twin and views Samey as a "spare Amy", "lesser Amy" or even a "second Amy," and thus the inferior sibling. She also remarks about wanting to change Samey's name to "Spare-Amy". Despite her claims of being intellectually superior over her sister, Amy frequently takes credit for her sister's strategies and other accomplishments and is very immature and bratty. She also refuses to take responsibility over her own failures, placing the blame on Samey whenever something goes amiss. This causes other people to believe Amy is more likable and useful. If Samey does something that Amy considers very bad, then she will be very determined to get her revenge. She is a member of a cheerleading team with Samey, as evidenced by their uniforms. When Lamey was created, Amy began displaying her insulting behavior all over again, calling her a "lame Amy", "least Amy", or even a "third Amy". Amy also wants to change Lamey's name to "Lame".

The subheadings below detail Amy's journey in BT Productions.

Amy is a member of Team Pahkitew. She is an annoying sociopath.

Six days after the Big Brother simulation, Amy saved Sam from choking. The pairing was given its name: Amam.

Amy kisses Samey again, but it was the result of a dare instead of a Sign Invasion event.

Amy participated in the 85-character simulation round. She stays quiet and uses annoying perk events until she kills Toad on Round 5. She stays quiet again until Dragonlord turned Scott into a sheep on Round 8. Amy put him out of his misery the next round. After that, Amy kills Patty in a duel. Amy dies after she attempted to score a fourth kill by killing Mayweather, but failed.

Amy's most significant interaction during the game was when she had a relationship with Turbo Secretii. They had amazing sex under the stars after Sylvester (Turbo's previous lover) was left to die during the Feast. They got into an Edit War, but they ended up hugging each other the next night. Turbo thinks she can break up with Dragonlord (her husband), but Amy accidentally disintegrates herself. This left Turbo facing Dragonlord for the Ball of Light, where she was defeated (just like in Turbo for Hire). After the storyline ended, Amy showed up in highlights. That was until she got into a fight with Sylveon while waiting for the results of Pikachu challenging Ricco Secretii's secret level. After it was revealed that Pikachu did not survive, Amy blamed Sylveon for causing the obvious day ending. Sylveon then reveals it was Scarlett's fault, causing Amy to target Scarlett. Amy would spend the next few days harrassing Scarlett until she eventually snapped at her. In the aftermath, Scarlett is willing to apologize for her actions as long as Amy leaves her alone. With the Scarlett storyline over, Amy switches targets and is now interacting with Samey once again. Tensions still remain however, when Katniss played The Sims and made them become enemies. 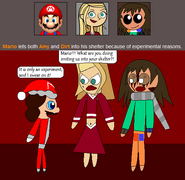 Amy is mad over being invited into Mario's shelter.

Even though she did not make a physical appearance, Amy did have twins with Cameron. 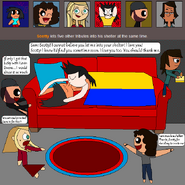 Amy is mad over being invited into Scotty's shelter so she could witness him kissing Sam. 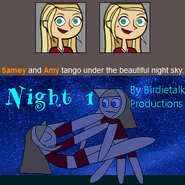 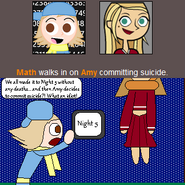 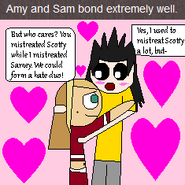 Amy bonds extremely well with Sam.
Add a photo to this gallery

Amy had a custom-made icon before BrantSteele released the official icon for her.

Retrieved from "https://birdietalk-productions.fandom.com/wiki/Amy?oldid=6939"
Community content is available under CC-BY-SA unless otherwise noted.